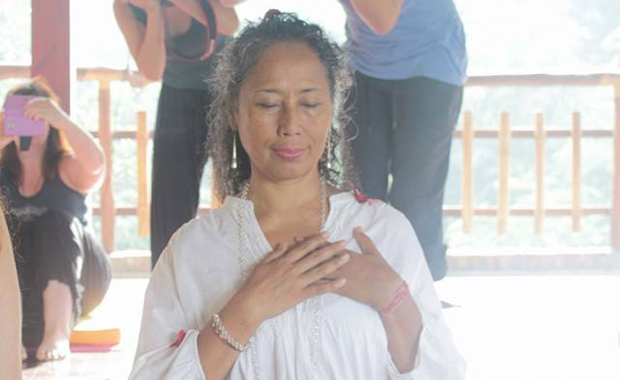 Just like Gentiana who traveled to the Kei Islands for the love of her life, so did Savitri when she moved to Canada where she now works as a yoga and meditation instructor. And as with most emigrants, Savitri’s cultural identity played an important role during that journey.

“My father Adrianus Agam Talahatu was born in Ambon. His father, Karel Talahatu, served in the KNIL (Dutch colonial army) and was executed by the Japanese during World War II in front of my dad, his brothers and his mother. To raise her boys, his mother had to do whatever she could. My father studied hard and became a meteorologist combining his work with his love for music and sports. He played jazz guitar, sang beautifully and played soccer and tennis very well. My mother Ana Saleh-Talahatu was born in Tanjung Pinang. Her father and her mother were both teachers and eventually she became one as well. A big part of her life she was a high school teacher and later on a school principal before she retired.”

“My parents met at the tennis court. They fell in love and decided to get married. My mum’s family didn’t approve of their marriage because dad was a Christian and my mum Muslim. So when dad was offered a job in Bali, to become part of a team working on the opening of Bali’s first airport in the late 50’s, they didn’t hesitate to move to Bali.” 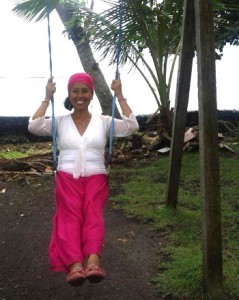 “It is best to stay as present as possible to the process and keep the focus in the Infinite, without getting overwhelmed by the transient.”

“I was born in Bali so I never experienced life in Ambon. Our upbringing did have Ambonese elements though. I remember wearing white lace or an embroidered white kebaya and a red sarong on special occasions. On Sundays we ate papeda, ikan bakar and colo-colo and I also know sagu and kenari because a relative sent those to us from Ambon. And not to mention the classic Ambonese stories oma told us, such as Batu Badaon which made me weep with sadness for the mother who became a stone.”

“I moved to Canada in 1992 for the love of my life. At the beginning I had a hard time to connect with people. They seemed to be rushed, didn’t smile and avoided eye contact. And they were not friendly to newcomers either. During that time, my identity crumbled and I had to build my life and myself back up from scratch. Fortunately, I was quite resourceful and I started making new friends from activities I love. So there are gamelan friends, dance friends, yoga friends, meditation friends, volunteer friends, holistic healing friends, etc. Once these relationships were established, I started to introduce Indonesian culture to my new friends and from then on difficulties with cultural identity seemed to dissolve.”

“From my parents I have learned that love is the basis of life. With strong love comes deep devotion and commitment to all that I do. Both my parents also volunteered their time to many causes, emphasizing to us the need to acknowledge our blessings and our responsibility to give back. That stayed with us because we have also been volunteering our time in a few causes of choice. From life I have learned that it is uncharted, forever changing and chaotic at times. It is best to stay as present as possible to the process and keep the focus in the Infinite, without getting overwhelmed by the transient.”